Genetic factors and lifestyle habits: can we act in favour of our cardiovascular health despite genetics?

Foundation, in collaboration with Dr. Marie-Pierre Dubé, director of the Beaulieu-Saucier Pharmacogenomics Centre at the Montreal Heart Institute

Home > Blog > Genetic factors and lifestyle habits: can we act in favour of our cardiovascular health despite genetics?
Copied link!
June 15, 2022
Share 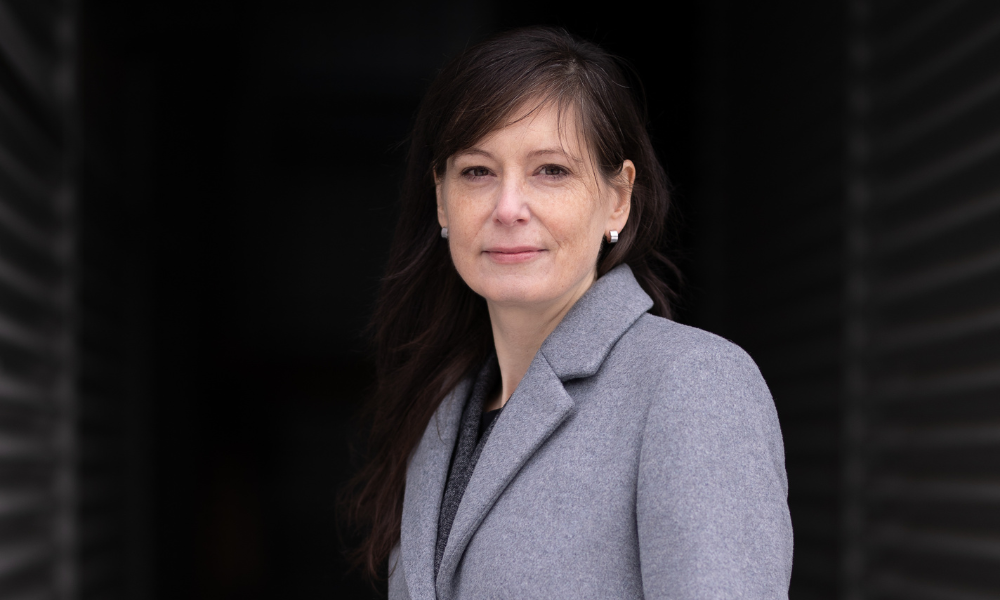 It’s often said that the apple doesn’t fall far from the tree… But what if we could somehow make it roll a bit farther away by having a healthier lifestyle? Dr. Marie-Pierre Dubé, director of the Beaulieu-Saucier Pharmacogenomics Centre at the Montreal Heart Institute, demonstrates the important influence that various modifiable factors have on the genetically determined risk of heart disease.

Understanding the human as a whole: Genetics and environment

Even if we can’t choose where we’re from, can we choose where we’re going? Dr. Marie-Pierre Dubé, who has devoted her career to the study of genetics, believes so. “Our genetic input, our baggage, is non-modifiable, but what about the factors that can be modified? In a lecture on genetic fatalism, the French physician Boris Cyrulnik raised the idea that to understand someone, one must consider the transaction between what the individual is and what is around him or her.” This is a starting point from which to understand the human as a whole and evaluate his or her power to act.

According to this researcher and professor, when we talk about cardiovascular diseases, many modifiable factors come into play. Beyond heredity, it is lifestyle habits that are truly decisive.

“Diet, physical activity, sleep, the quality of one’s social environment, and many other elements on which we can act play an important role, regardless of a person’s genetic predispositions.”

A study that challenges genetic fatalism

In 2016, the New England Journal of Medicine published a landmark study that paved the way for much future research. It revealed the impact of good lifestyle habits on the risk of heart disease in patients with genetic risks.

According to four criteria (physical activity, diet, absence of obesity, and absence of smoking), a score was assigned to each participant in the study and compared with a polygenic risk score for heart disease.

Cardiovascular risk reduction for everyone

Dr. Marie-Pierre Dubé, who leads a team of researchers at the Beaulieu-Saucier Pharmacogenomics Centre, relies on the tangible results of this research. “The study shows that regardless of the genetic risk category (low, intermediate, or high) that one belongs to, good lifestyle habits reduce the risk of cardiac events over 10 years. Those who, in the genetic lottery, have been less lucky by having more factors that predispose them to cardiac events manage to considerably reduce their risk by adopting healthy lifestyle habits.” 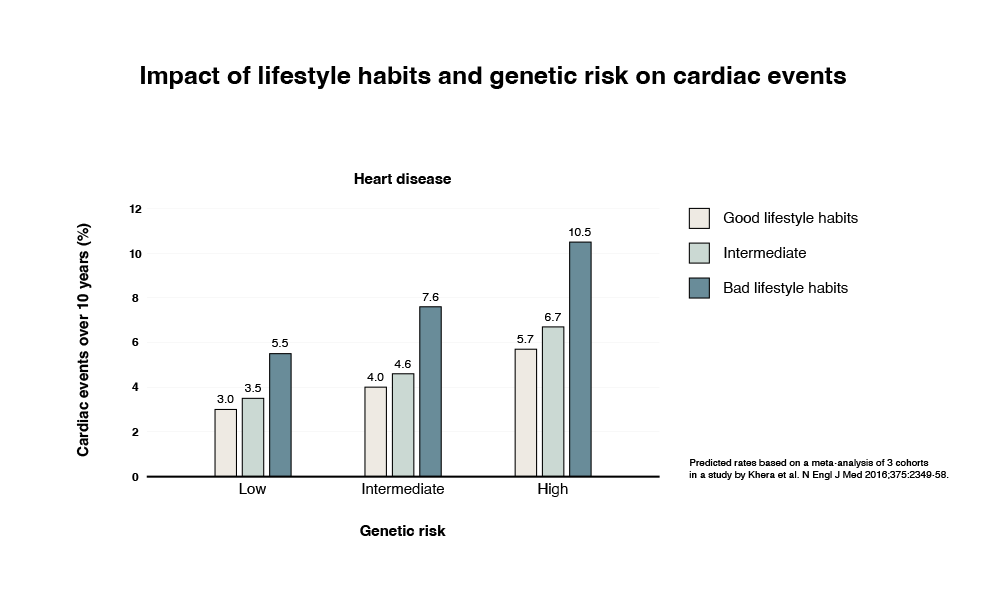 The influence of healthy lifestyle habits on other genetic factors

Over the past few decades, several in-depth studies have confirmed the possibility of getting around heredity in areas other than cardiovascular disease.

“The positive contribution of healthy lifestyle habits, relative to genetic risks, is observed in the prevalence of breast cancer, dementia, diabetes, obesity, depression, and several other health problems.”

Data corroborates the importance of prevention, which works on all fronts.

The Quebec Breast Cancer Foundation insists on the relative contribution of modifiable and non-modifiable risk factors, and suggests, like the Centre ÉPIC at the Montreal Heart Institute, adopting good habits such as a healthy lifestyle, moderate alcohol consumption, maintaining a healthy weight, and engaging in regular physical activity.

Relying on science to free oneself from false beliefs

Passionate about precision medicine, Dr. Marie-Pierre Dubé reiterates the importance of science and the role of genes involved in diseases, both for predicting risk of disease and for developing new medicines.

However, she warns us against genetic fatalism, where only heredity is considered as determining our future. “We can stop with the fatalistic posture of ‘what’s the point, it’s in my family,’ but also the opposite opinion that ‘genetics has nothing to do with it.’ Thanks to science, we are moving away from formerly held beliefs in favour of an enlightened position: ‘Genetics helps predict risk, and interventions aimed at adopting healthy habits are useful for everyone.’”

The Foundation is essential to this sphere of activity at the Montreal Heart Institute. Our donors allow us to support teams of professionals who, like Dr. Dubé, devote their energy to advancing research in precision medicine and improving the quality of life of patients living with cardiovascular disease. The Centre ÉPIC at the Montreal Heart Institute also plays an important role in prevention within cardiovascular health. A great deal of research is also carried out there with the aim of prolonging the healthy lives of patients. 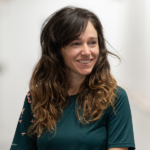 July 21, 2022
The relationship between mental well-being and cardiovascular health

July 21, 2022
The relationship between mental well-being and cardiovascular health 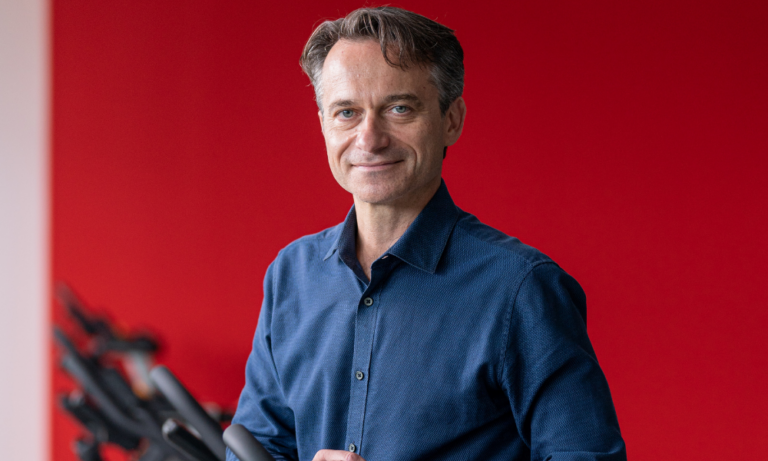 “Some might be asking themselves why an institution like ours, dedicated to cardiology, studies the brain. That’s because the heart and brain are in fact inextricably linked. What’s good for one is good for the other,” said Dr. Bherer who is dedicated to finding ways to prevent conditions that affect these two key organs. 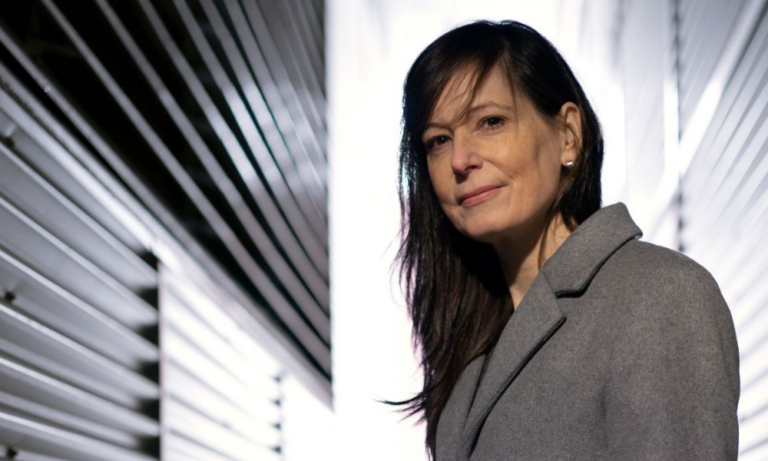 As Director of the Université de Montréal’s Beaulieu-Saucier Pharmacogenomics Centre at the Montreal Heart Institute for nearly 10 years now, she oversees a team of some 20 experts and wears several hats, including researcher, associate professor and scientific author. She loves her work and enjoys sharing that passion with others. 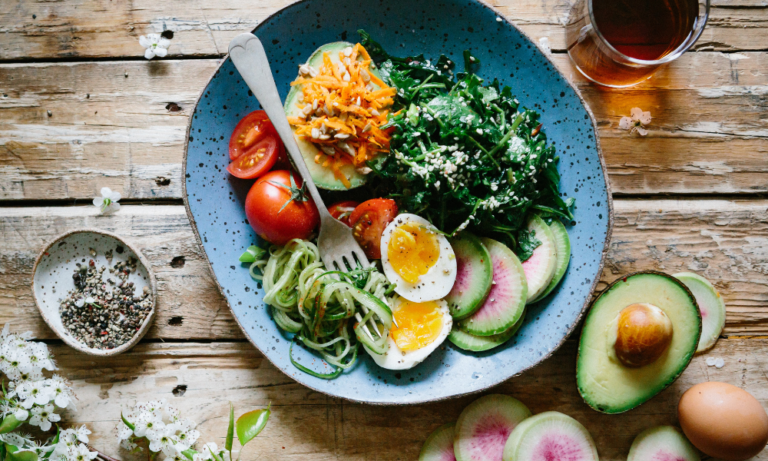 April 12, 2022 ─
Cardiovascular prevention and the Mediterranean diet: the impact of diet on healthy life expectancy

“An apple a day keeps the doctor away.” And what if this saying actually had some truth to it? Dr. Martin Juneau, cardiologist and director of prevention at the Montreal Heart Institute, explains the impact of good dietary practices on healthy life expectancy and cardiovascular disease.

The brain and the heart: in literature these two organs are supposedly opposed to each other, which gives rise to great internal strife. In the field of health, however, they form an inseparable duo . Dr. Louis Bherer, neuropsychologist at the Montreal Heart Institute, is interested in prevention measures that act in synergy on these two central motors.